The university confirmed that John McAdams, a political science professor at Marquette University widely known for winning the 2018 free speech case against the university, has died.

The circumstances surrounding McAdams’ death late Thursday were not immediately clear. He was 75 years old, according to his author page in the U.S. Library of Congress.

McAdams was a Marquette Professor for nearly 45 years, and was an internationally recognized scholar on the assassination of President John F. Kennedy. He taught courses in American politics, public opinion, and voter behavior.

McAdams is perhaps best known for being at the center of a highly politicized debate about free speech and academic freedom, which began in November 2014 when he published his thoughts on whether a Marquette graduate teacher had prevented a student from discussing an opponent. A view toward same-sex marriage during separation.

McAdams posted his views on his personal blog, Marquette Warrior, where he named the graduate’s teacher and listed her contact information online.

Marquette suspended McAdams and sued the professor. He eventually won his case before the Wisconsin Supreme Court, which ordered Marquette to immediately reinstate him. He had spent seven semesters in suspension at that point.

Related:After winning in court, Professor Marquette John McAdams launches a challenge to the politics of cyberbullying

The case has become a sensational issue among those who believe that liberal arts universities are bastions of liberalism that suppress conservative views. It was also seen as a victory for the academic freedom of the professors.

McAdams argued that the court case had so much to do with not allowing a student to express their opinions in the classroom—in this case, an opinion opposing same-sex marriage which is consistent with the doctrine of the Catholic Church. 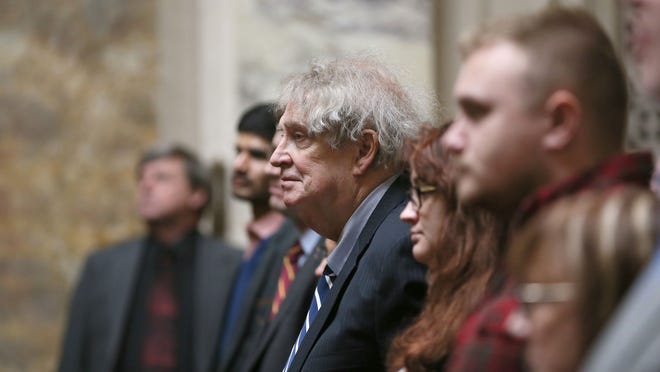 Marquette emphasized that the issue was never about freedom of expression, but rather the decision to make the student’s name and contact information public. The student ended up leaving Marquette after receiving “vile and threatening” messages in the wake of McAdams’ blog post.

After the ruling, McAdams told the Journal Sentinel that it was important to call the graduate student “misconduct” in her role as a teacher.

“It’s ridiculous that when you find misconduct in a bureaucracy, you can’t state it publicly,” he said. “Fighting a battle against the bureaucracy is often much less effective than bringing sunlight into the situation.”

The university said in a statement Thursday that the campus community mourns the loss.

“The Marquette community expresses its deepest sympathies and prayers to Dr. McAdams’ family, friends, colleagues and students,” the statement read.

Rick Isenberg, president and general counsel of the Wisconsin Institute of Law and Liberty, represented him in the case against Marquette.

“He was a man who saw in the university a place where there were competing ideas and people would argue, sometimes forcefully, but they would coexist,” he said.

McAdams is also the author of the 2011 book “The Logic of the JFK Assassination: How to Think of Conspiracy Claims”.

Before coming to Marquette, McAdams taught at Harvard University and Boston University and was a National Fellow at the Hoover Institution, according to his resume and biography on Marquette’s website.

He received a BA in Sociology from the University of Alabama, a MA in Social Studies Education from Columbia University, and a Ph.D. in Political Science from Harvard University.